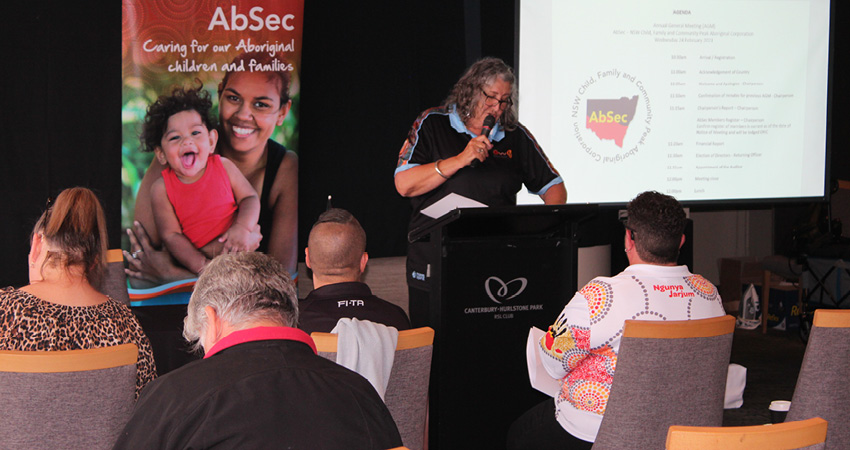 The AbSec Annual General Meeting (AGM) was held on Wednesday 24 February 2021, showcasing the achievements of the last 12 months, providing insight into some of the challenges and looking at the year ahead. Even though the AGM was delayed this year there was still a great turnout from many of our members and stakeholders.

The AGM opened with an Acknowledgement of Country as well as a welcome and apologies from AbSec Chairperson Dana Clarke. Like always, there were also some procedural duties that had to be carried out, such as confirming the minutes of the previous AGM.

Dana Clarke then addressed attendees when handing down the Annual Report with her Chairperson’s report. She spoke of the strength of AbSec during such a challenging year, including an acknowledgment to the hardworking board of directors and staff, the progress the organisation has made and also the work that still needs to be done to create a brighter future for Aboriginal kids in NSW.

Dana said, “As the Chairperson of AbSec, I am proud of the work this organisation has done over the past 12 months in fighting for our communities. This was the first year of implementing our new strategic plan for 2019-2022, and the core of this plan remains supporting our children and families and their best interests.”

On the future, she continued, “Aboriginal children remain severely overrepresented in the child protection system making up 40% of those in out-of-home care despite only being 5% of children in the state, 10 times more likely to be taken from their families than non-Aboriginal children. It is these shocking statistics that drive much of the work that we do, with the need for whole-of-system reform in the child protection system and the implementation of the Family is Culture recommendations never having been more urgent. The disproportionate removal of our kids from culture, community and kin will be front of mind as we continue to work towards better outcomes for our children over the next year.”

Following the Chairperson’s report and a comprehensive financial report from our auditor, the election of directors was conducted. All of the board members except Chairperson Dana Clarke and Vice-Chairperson Petrice Manton had reached the end of their two-year term. AbSec takes its role in ensuring good governance seriously with the board of directors made up of representatives of Aboriginal community-controlled organisations from across NSW.

We are pleased to advise that our board of directors now consists of the following members:

AbSec’s board and all our staff are excited about the year ahead, and as the peak organisation for Aboriginal children, families and communities in NSW, we look forward to representing our sector and fighting for our kids.